Teacakes, of the marshmallow and chocolate variety, may not appear to be the most obvious choice for a festive post.  Pimped up appropriately however, they can become so, lending themselves quite obviously to the form of a Christmas pud.

I am attempting to redeem myself having almost entirely missed the opportunity for a festive post.  Storms have resulted in no broadband for 6 days and hence an enforced break from blogging over the festive period, ironically, the first time in months I have had more time to prepare food and post than usual.  So, belated Merry Christmas to all those who sent good wishes, sorry I have been slow to reciprocate.

The storms here, as elsewhere in the country have had considerable impacts.  We were very fortunate not to lose power on Christmas day, and the Christmas Eve storm was not quite as fierce as it was forecast to be. We also had a turkey-cooking contingency plan.  A friend kindly offered a gas oven should the power go off which thankfully it did not, other than for a couple of minutes.  That said, it was windy enough to affect the radio signal.  We spent Christmas day without broadband, our phone line still is not working and to top it all off, no radio signal.  We felt disappointed not to be able to communicate with friends and family freely, or to listen to Radio 4, as we enjoy doing, on Christmas Day.

That said, our issues felt trivial compared with those unfortunates in the south of England with no power, properties and possessions ruined by flooding and no certainty of when normality may return, with further unsettled weather forecast and flood warnings in place. This really put our minor issues in perspective and our thoughts were with people who will have had a very unpleasant Christmas.

For us, Christmas, in all honesty is no biggie, although we do enjoy the relaxation, chance to catch up with friends and family (although many are dispersed and far away) and indulge.  I know, it is a bit bah humbug, but I cannot help but reflect on the fact that for many people, Christmas is a very difficult time.  This is especially the case for those who have suffered loss or whose loved ones are missing. Many people are not surrounded by family and friends but spend Christmas isolated and lonely.  This must be amplified for many by the general media portrayal of the cliched scenario that Christmas Day is all about multiple generations of family coming together to harmoniously and joyously celebrate around a table groaning with food.  I commend Radio 4 and Channel 4 for reflective coverage of the more difficult but realistic side of this time of year for many people. This year, I have lost my Uncle, a friend, a neighbour (another friend) and, sadly, last week, a work colleague. My thoughts are with those most affected by these losses. Much as I am not at all prone to nostalgia, I will certainly not be looking back on 2013 fondly, and look forward positively to what 2014 may bring. And so, back to food….

While it may be a bit late now to recount in full those seasonally appropriate recipes here, I summarise. Christmas Day was straightforward and traditional.  We enjoyed Eggs Benedict with parma ham on homemade muffins for brunch.  Canapés included slices from a side of local peat smoke roasted salmon we purchased from the Hebridean smokehouse, conveniently only 2 miles from the house. A bit of luxury and well worth it. We also enjoyed goose rillettes, made from confit wild greylag goose legs, another local luxury which only cost me my time to prepare.

Dinner was traditional – local turkey and all the trimmings.  We still enjoy an annual Christmas turkey, something we very much missed when we were vegetarians. Turkey seems to be a bit passé just now, with goose or capon trending, but we regularly eat wild goose, so a free range very local turkey from our neighbour was a much bigger treat. Literally. Dessert was a simple refreshing orange panna cotta with a sharp blackcurrant compote, made during the summer fruit glut and kept in reserve for mid winter.

Dinner was a relaxing affair, but for the point half way through the meal when we turned round to see the Christmas tree lights flicker and a cascade of smoke drifting upwards from a melting light housing on the tree! The Man Named Sous took quick action to unplug the tree and avert disaster. Phew! A new set of lights required for next year.

On the baking front, I made good old traditional mince pies, topped with almonds and frangipane, filled with homemade vegetarian mincemeat I made back in November. The frangipane topping idea is courtesy of Richard Bertinet, the recipe can be found here. The pastry was wonderfully crisp and thin. These mince pies were devoured hot from the oven by our ever eager visiting musician friends just before Christmas.

Stollen also featured, currently trending as the seasonal cake of choice this year.  It was reassuringly solid, about the weight of a breeze block, an indication of its authenticity. It was also delicious with a swirl of marzipan, added non-traditional cranberries and a good hit of ground cloves and nutmeg. This was a gift for a friend and stollen aficionado, and was well received. This was Mr Hollywood’s Christmas GBBO stollen recipe. Darwin also assists as a prop in the photo, looking longingly at the stollen.

Finally, a more quirky offering as a tribute to Tunnock’s teacakes. For those not aware of these products of legendary significance for Scottish gastromony, a Tunnock’s teacake should not be confused with the traditional English teacake, an enriched dough sweet pastry roll with dried fruit and spices, usually served toasted and spread with butter.

The Tunnock’s Teacake is a dome of chocolate filled with marshmallow, similar to Italian meringue, sitting on a shortbread-like biscuit base (also encased in chocolate). The packaging is iconic and distinctive, each teacake encased in striped silver and red foil (milk chocolate) or silver and blue foil (dark chocolate, less common/popular than the milk version). 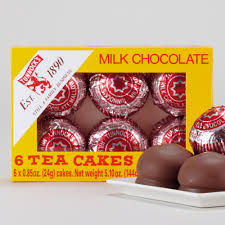 The Tunnock’s factory is in Uddingston in Lanarkshire and their products even inspired traditional fiddler John McCusker to pen a tune entitled ‘A Mile Down the Road’ in honour of Tunnock’s since he lived close to the factory at one time. Apparently, there is a 2 year long waiting list for tours of the factory, which churns out 10 million biscuits a week including another biscuit icon, the Caramel Wafer.  However, the teacake is not my personal favourite, I always preferred Tunnock’s coconut and chocolate-coated Caramel Log. Controversial.

My attempt to make teacakes came about because of the affection others have for this enigmatic sweet treat (you know who you are!). Pressure came to bear when contestants were set a technical challenge of making them on the Great British Bake Off and a Paul Hollywood recipe was posted online. I was gifted a silicone teacake mould, the caveat being I had to, of course, make some.  I was delighted with the gift and happy to oblige.

I used Paul Hollywood’s recipe.  I usually use very high quality dark chocolate, at least 70% cocoa solids, but stuck to his advice to use lower cocoa solid chocolate, to avoid discolouration / cracking.  It worked very well.  I made a second festive batch with milk chocolate, as a gift for a friend who is a Tunnock’s teacake lover, but prefers milk chocolate.  I used 50% cocoa solid milk chocolate (Co-op Fairtrade), and was surprised how much more delicate and hard to work it was than the dark Bournville I used for the first batch. For the second festive batch, I also reduced the amount of salt to 1/4 teaspoon as I could detect too much salt flavour in the first batch.

The recipe also wisely advises the turned out teacakes should not be handled as the shiny exterior is easily marked with fingerprints.  Also, they should not be put in the fridge as they will lose their shine.  So, best eaten fresh.

Although time consuming and a bit fiddly, the recipe gave good results and they were great fun to make.  Even better, they were very much appreciated and enjoyed by the teacake lovers.  I don’t have a sweet tooth, and this became very apparent when I sat down to eat the teacakes with a few aficionados. The presentation of the teacakes had a sense of occasion and anticipation.

Firstly, these teacakes are massive compared with Tunnock’s. By the time I got half way through, everyone else was finished eating theirs, commenting on the delights of the teacakes and thinking of going for a second one. I however, was feeling slightly queasy at the thought of eating the second half of mine. It was simply too big and sweet for me. The others though there was clearly something wrong with my palate, or the wiring of my brain. One muncher commented with an air of disappointment that he was not able to get the whole thing in his mouth at once, as you could a Tunnock’s (!). There were also heroic tales of entire boxes of 6 being consumed in one sitting. Finally, they are extremely messy to eat, so prepare to roll your sleeves up and to wear meringue from ear to ear.

The milk chocolate versions were given a festive twist, a dollop of melted white chocolate and some marzipan coloured with natural food dyes transforming them into Christmas puds, giving them that bit more bling required for a gift.  I stopped short of including a blob of mincemeat within each, although I was tempted.  Maybe next year….

Hogmanay is almost here, so Happy New Year, all the best for 2014, see you on the other side!

36 thoughts on “Teacakes: Homage to Tunnock’s – festive or otherwise”