I must admit that my forced rhubarb is not Hebridean in origin, but at least in justification, I am supporting an important and seasonal piece of British food history and our food industry by buying it. It hails from the famous Rhubarb Triangle, an area of West Yorkshire between Wakefield, Morley and Rothwell famous for producing early forced rhubarb in the darkness of forcing sheds. So historically important is this area for growing forced rhubarb, it was awarded Protected Designation of Origin (PDO) status by the EU in 2010. The stems of forced rhubarb are crimson, delicate and sweet, quite a different animal the equally delightful outdoor thug that will be gracing the gardens and fields of the UK from now (well, if it warms up).

Of course, had the builders not dug out the foundation for the workshop while we were away on holiday, I would have had time to rescue our rhubarb. Alas, I have to start again by growing new crowns.

Crumble is so simple and delicious and of course, rhubarb crumble is hard to beat. Yes, it is patently a fairly rustic affair, but for something that tastes divine and takes no more than 20 minutes to prepare and 20 to cook, who could possibly resent the time spent to produce such cuddlesome comfort food. My time is very stretched just now, so crumble recipes are ideal for such busy phases.

To further bolster my argument, what better excuse to indulge in a comprehensive choice of delightful accompaniments of the dairy variety: ice cream, cream, custard, crème patisserie, crème fraiche or yoghurt. it really would not be the same without one of them, would it?

I prefer to retain the sharpness of the rhubarb, so I don’t add much sugar at all, especially since the pomegranate molasses add sweetness.  This also applies to rosewater – don’t add too much or it becomes unpleasantly overpowering.

Preheat the oven to 180C 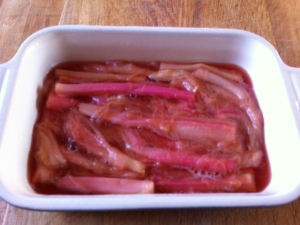 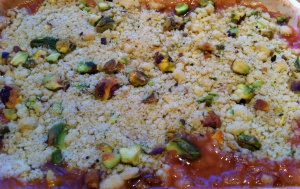 I am looking forward to the new series starting next week on Channel 4, Yotam Ottolenghi’s Mediterranean Feasts. I follow Ottolenghi’s regular column in The Guardian for recipe inspirations and only recently acquired my first Ottolenghi cookbook, his eponymously titled first book. I have hardly had my nose out of it over the last month. What a truly inventive chef, who has almost single-handedly revolutionised the UK perspective on cooking food inspired by North Africa and the Med.

Yes, when I find books by an inspirational chef it is always tempting to get onto the web and order everything they have published. Having done that, I know the resulting recipe saturation means I don’t really explore each book in depth and they become coffee table objects, gathering dust but no food splatters – the real mark of love on a cookbook.

After a visit to Nick Nairn’s Braeval restaurant in Aberfoyle back in 1996, my first real experience of Michelin star level fine dining (it was a genuine revelation), I indulged in almost every recipe from that first Wild Harvest book, which is now extremely dog-eared (and food splattered). I don’t use it so much now, but still leaf through the pages and revisit nostalgic memories of the flavours generated from within. I do use it to remind myself of his marvellous creme brulee recipe – the finest, easiest and most reliable I know.

So far Ottolenghi has inspired me to try 20 or so recipes over the last month, a mixture of savoury and sweet. Most I have enjoyed and would recommend and all without exception are unfussy and simple to prepare, part of the Ottolenghi philosophy. I plan more Ottolenghi cookbook forays over the next week. To celebrate the beginning of the long overdue TV series next week, here are a couple of the tasty sweet recipes I have tried and loved.

Much as pistachio is my favourite nut (well, vieing for the title with hazelnuts), the draw of this recipe is the aromatic inclusion of the ground cardamom, reminiscent of the decadent sweetness of baklava. Apparently Persian baklava typically has the essence of this sweet pastry that I favour – infused with pistachio, rosewater and cardamom.  I do not have a sweet tooth, but enjoy a modicum of this divine filo delight, preferably served with an authentic cardamom-infused Turkish coffee.

But cardamom with shortbread?  Oh yes, this turns my experience of this Scottish stalwart on its head.  I must admit, I veer away from some traditional recipes and I have never made shortbread. I remember helping my mum make it,  pressing the playdough-like sweet buttery mix into a wooden mould depicting a thistle, but I was never excited by its buttery decadence.  I was deterred further by the fact that traditionally, some recipes call for the inexplicable inclusion of fine semolina which is supposed to add a grainy, crumbly texture and is, in my opinion, a spoiler.

So, much as the pistachio and cardamom encouraged this shortbread virgin to give it a try, so did the inclusion of ground rice, to my mind much more refined and a superior choice than semolina.

The recipe suggests crushing the contents of 8 cardamom pods.  I wanted to know how much ground cardamom this equated to, as I also have ground cardamom in the store cupboard.  You can buy it online from the Ottolenghi store, but I also found it in our local North Uist independent shop at Bayhead.  They keep a surprisingly extensive range of herbs and spices. The cardamom I ground from the whole pods was, unsurprisingly, much more intense than the ground I had in store and amounted to about half a teaspoon, although I would add more if using pre-ground.

While making this recipe using the Kenwood Chef I inherited from my grandmother (a 1960’s model, I think), I was surprised to find how much icing sugar appeared to be puffing up out of the bowl.  Then came a whiff of electrical burning and I realised the motor on the old Chef had expired.  I thought of all the clootie dumplings my grandmother had made with it and I had killed it with my first batch of unconventional shortbread.  I can imagine what she would have said.  She was a bit scary.

Oh well, looks like I will need that new KitchenAid after all, but it will have to get in the queue behind the new washing machine, which broke the same day as I broke the Chef, helpfully spewing it’s soapy contents over my feet as I absent-mindedly opened the door.

I know shortbread is decadent with butter quantities that could reduce the European butter mountain, but a nice treat once in a while…enough of the pre-amble, although, one final warning.  Most of Yotam’s recipes appear to use every bowl in the kitchen, except this shortbread (see next recipe as an illustration). Here is the recipe:

8 cardamom pods, split and contents ground in a pestle and mortar

Crush the cardamom in a pestle and mortar.

Use an electric mixer (if you have one)  to turn the butter, ground rice, flour, salt cardamom and icing sugar to a paste. It’s a bit of a battle without the mixer, but achievable using a wooden spoon or scraper.

Take the dough, dust with a bit of flour and roll into a log 3-4 cm in diameter.  Wrap in cling film and put in the fridge for an hour or so.

Chop the nuts reasonably finely, brush the log with beaten egg and roll in the chopped pistachios.  The dough is quite forgiving, so don’t be afraid to apply a bit of pressure to get a good coating.

Wrap and put the log back in the fridge for at least 30 minutes ( I forgot about it, but a couple of hours did it no harm).

Unwrap and cut the log into slices about 5 mm thick.  I experimented with the thickness, but found 5mm to be just right, 1cm too thick.

Put on a baking sheet lined with parchment, each about 2cm apart, sprinkle with sugar and bake.

Recipe suggests 20 minutes, mine needed about 28, but you have to know your oven and watch them as they shouldn’t be more than pale golden.

The dough can be stored in the freezer if you want to make smaller batches.  I got 23 biscuits out of the full recipe. 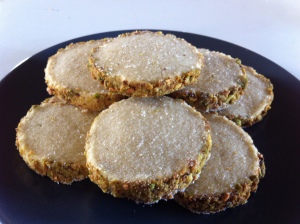 Pistachio shortbread – Does what it says on the tin – wonderfully short and aromatic.

grated zest of a lemon

Grease you loaf tin/s with butter and line with parchment.

Mix apple and pear with walnuts, lemon zest, and Amaretto. In another bowl, sift the flour, baking powder, cinnamon and cloves. Add the ground almonds.

Separate 2 of the eggs, keep the whites separate while mixing the yolks with the third egg.  Beat together the oil and sugar in yet another bowl for one minute.

Slowly add the yolk and egg mix, then add the sifted dry ingredients followed by the fruit.  Mix until just incorporated.

Whisk the egg whites with the salt to form stiff peaks (using yet another bowl – that’s 4 so far!) and fold gently into the cake mix. Put the mix in the cake tin and sprinkle liberally with the crumble.

Bake for 45 mins to an hour, or until a skewer comes out clean when pushed into the middle of the cake.  If it gets a bit brown on top, stick some foil over it until it is ready.

Thankfully, no need for another bowl. Fling the mix into a food processor and pulse until it forms a breadcrumb consistency, or mix using your hands. If you use a processor, make sure it just turns to breadcrumbs and no more, or you will have cookie dough.

Put the excess in the freezer to use another time.