Last week, after a 5 year campaign, Stornoway Black Pudding at last received its deserved Protected Geographical Indication (PGI) status, under the EU’s Protected Food Name (PFN) scheme. It is not often that these islands on the fringe of Europe have a gastronomic accolade bestowed on them. What better reason to indulge in my favourite blood pudding.  It might be mid-week, but what the heck…

In fact, this post is one in celebration of prime Scottish ingredients at different geographical scales; National: Angus asparagus; Regional: Stornoway Black Pudding; Local (very): my neighbour’s Gloucester Old Spot pig for our home made pancetta.

In the land of the deep fried Mars Bar

It is unfortunate indeed that Scotland is synonymous with bad food – not least deep fried everything – indeed it could be argued that this recipe, in part, reinforces the stereotype.

When I lived / worked abroad (in Portugal, Hungary) and on excursions across Europe and beyond, I came to appreciate how different our food culture is from that of a sizeable chunk of the planet – we had no daily food market culture and yet it is such an intrinsic part of life elsewhere.  It is something I have long admired and missed about living in Southern Europe.

It is worth reflecting on this because I think in the last decade, a lot has changed. We have become aware of the value of food provenance as well as eating locally and seasonally. Farmer’s markets bring new insights into good British artisan produce.  Perhaps the tide has turned, we just need to look a bit harder in the surf to find the gastronomic gems.

I think this is the essence of the problem we face as British consumers trying to seek out the clichéd ‘Best of British’, it can be hard to find, and you have got to work (comparatively) hard to get a hold of the best. This is exemplified by the efforts one must go to here to seek out the very best produce but be reassured, there is no doubt it is here.

In Uist, we export the finest seafood in the world to continental Europe, principally France and Spain.  I am lucky since if I want live langoustine, lobster or crab and hand-dived scallops, I know where to source them.  I know where and how to collect local shellfish and where to catch trout / seafish. I can forage for seaweed, samphire, nettles, herbs.  However, all this takes considerable local knowledge, effort and that thing that life always seems be short of – time.  Here in particular, food really has to matter to enable one to access the best. It does pain me that often visitors ask where they can get local seafood, fish and meat.  The answer in never straightforward.

And so to our fine produce… 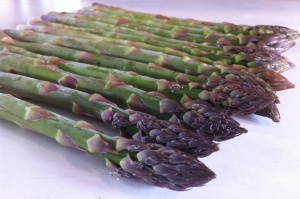 If it was not for Fiona Bird (see my last post reviewing her book ‘The Forager’s Kitchen’), I would not have become aware of the suppliers of fine Scottish asparagus from Eassie farm, Glamis, Angus.  Fiona has roots in Angus and after a recent trip, kindly left me some of this fine product at a specified drop off point (again – this time the Cal Mac ferry office, Lochmaddy – thank you Fi and staff).

Eassie Farm asparagus is suberb quality and supplied to London’s Covent and Borough markets as well as fine dining restaurants across the UK such as The Kitchin, Edinburgh (one of my favourite restaurants, more on that later).  I can see why discerning customers would seek it out.  This is probably the best asparagus I have eaten. Of course, I have tried and failed spectacularly to grow it here.  However, I think after tonight’s asparagus excursion, I am determined to try again.

More about the Angus asparagus can be found here. Asparagus production is not Eassie farm’s only talent, they also produce sea kale, and I really hope to try some of that in future. 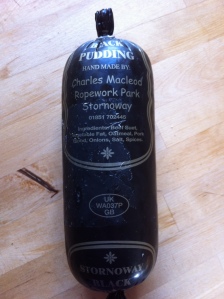 This genuinely wonderful product joins the ranks of Champagne, Parmigiano-Reggiano, Stilton Cheese and another Scottish favourite, Arbroath Smokies. The PGI status now guarantees the provenance of this iconic Scottish product. This status can only be described as Stornoway Black Pudding if it is produced in the town or parish of Stornoway on Lewis.

It is intrinsically linked with the food heritage of these islands and black pudding has been made on crofts in the Outer Hebrides for hundreds of years.  PGI will hopefully eliminate the threat to the pudding posed by  imitation “Stornoway Style” black puddings, produced elsewhere that are invariably, in my experience, inferior products.

Stornoway Black pudding is produced by only 4 butchers in the Stornoway area. It is rich, moist, decadent, delicately seasoned and every bit as distinctive and unique as the delectable Spanish morcilla and French Boudin noir. 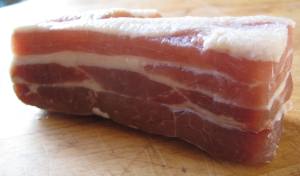 Except for the occasional tweet about the progress of our Gloucester Old Spot pig butchery, sausage and bacon making, this is the first time I have had the opportunity to include this wonderful produce in a recipe for a post.

We bought half of one of my neighbour’s Old Spot pigs a few weeks ago.  I could see the two Old Spots wandering around the croft from my office window until their demise and I am delighted to say I know they had a wonderful time, freely rooting around in their luxurious field and quarters until their time came.

It is widely understood that pigs are very intelligent and sensitive animals and no secret that there are welfare issues associated with pork and derivative products such as sausage (if indeed it is pork!) and bacon we can buy commercially in the UK.  I do not choose to consume this kind of pork.

To use the cliché, to buy free range, slow grown pork of a heritage breed is a totally different animal. I will focus more on the butchery, sausage and bacon making of the Old Spot in a future post. For this recipe, we wanted to include some of the dry cured bacon we made from the pork belly.  Some of this was kept in chunks and frozen to provide us with pancetta-style lardons for recipes such as this.

This green bacon is as far removed from average shop bought bacon as you could imagine. It is succulent and flavoursome without exuding water (commercial bacon is usually injected with water to speed up curing) and is not overly salty. 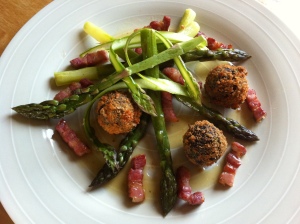 Originally, this recipe was set to feature hand-dived scallops since scallops are a tried and tested combination with asparagus.  Unfortunately, the weather has been a bit rough for the last week for the divers to get out.  I’m trying hard not to complain about the atrocious weather we are having, in fact, it doesn’t feel like spring has yet started and the vegetation and garden are testament to that fact.  However, this weekend, I saw the first few broods of greylag geese and the short-eared owls are hunting around the house, otherwise, I wouldn’t be able to tell whether it is November or May!  I have the utmost sympathy for visiting tourists – not least cyclists, I have been there and it is not pleasant.

The elements of this dish offer no great innovations in combination, but they work.  If it isn’t broken, don’t try and fix it – just use the best quality ingredients available, which is what I have tried to do.

The bon bons are simple to make and are deliciously soft and sumptuous and packed with flavour. They are simply shaped spheres of Stornoway Black Pudding coated in seasoned breadcrumbs with Parmesan cheese and parsley (parsley from the garden, home made breadcrumbs).

The asparagus was simply sauted.  This approach was inspired by Tom Kitchin and his “à la minute” style of cooking, where the sauce is prepared just before serving, very fresh and captures the essence of the asparagus. I had watched him demonstrate a similar recipe to students on the new BBC series ‘The Chef’s Protégé’ this week and it seemed like the most respectful way possible to treat this high quality asparagus.

Advice for asparagus: Because asparagus spears are tapered, unlike when contained in an asparagus steamer, when sauted, the tips cook at a faster rate than the more woody bases.  To compensate, remove the green outer layer from the bases of the spears at about 4 cm from the bottom.  That way your spears will sauté evenly and the tips will not be soggy and over cooked.

I used the best quality balsamic vinegar and Jerez sherry vinegar to finish the sauce. This provided the right balance of acidity to accompany the rich elements of the dish. Timing is all for this dish and each of the elements have to come together within a couple of minutes, so get everything prepared in advance to bring it together quickly.

For asparagus and sauce:

a splash of rapeseed oil

salt and pepper, to taste

a splash of rapeseed oil 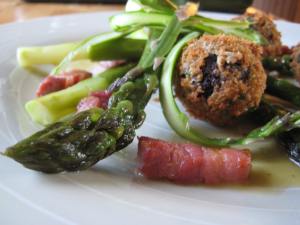