It’s been a while since I posted a recipe that included the most obvious bounty on my doorstep – seaweed, in this case, dulse. I have coupled this with my first attempt at preparing salt beef, using a fine quality brisket of Aberdeen Angus. This unique combination produced a sandwich of some distinction, well worth the effort to collect the dulse and time to brine the beef.

As mentioned before, I am not a hardcore forager because in some respects, I don’t believe in tokenistic use of foraged ingredients. Seaweeds, if not appropriately processed, carefully considered and balanced to be an integral part of a dish can fall into this category. Dulse, however, I have discovered, does have significant merit as a distinctive ingredient that brings novel and intriguing flavour dimensions to a dish.

I am slightly limited in my experimental explorations with seaweeds as I currently don’t have a dehydrator, a tool that would give me more flexibility in using seaweed as an ingredient. Given that we are on the cusp of renovating the house and in the process of packing stuff away to facilitate the incredible mess that will ensue, buying more kitchen gadgets, normally something I would be looking for an excuse to do, is not on the cards. 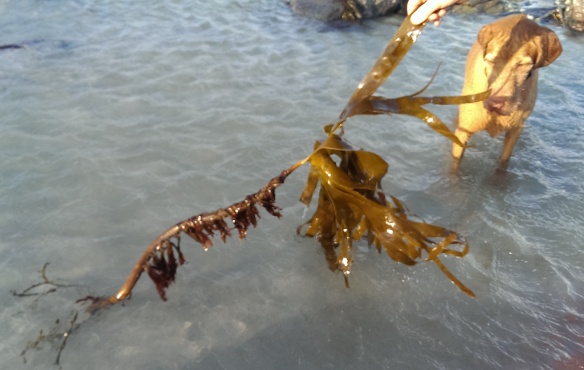 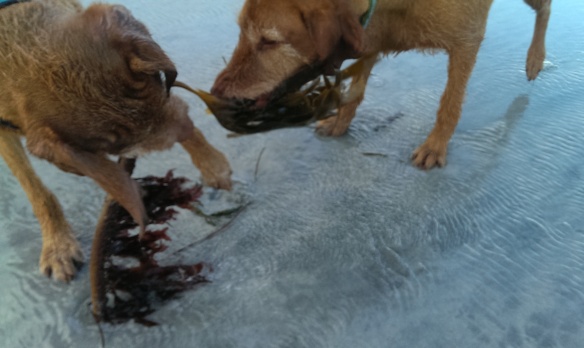 It is not the best time of year to be collecting dulse – end of summer / early autumn is optimal, but where there is kelp, it can usually be found at anytime of the year. I began thinking about recipe ideas, as possible contributions to Fiona Bird’s next book – based around culinary explorations with seaweed. The least I could do was come up with some ideas for Fi, Champion of Hebridean seaweed. See also my review of Fiona’s fabulous last book ‘The Forager’s Kitchen‘.

On a sunny but very windy day, we combed our local beach for living kelp that had been cast ashore (as opposed to the masses of dead plants, detached and usually devoid of dulse).  The holdfasts (‘root’) of living kelp plants still grip hard to the boulder substrate on which they are growing and are often thrown high up this beach during storms, well above the kelp zone, therefore making them easy to find.

So why, you may ask am I looking for kelp but intend to forage for dulse?  Dulse (Palmaria palmata) is a red seaweed that is epiphytic on several species of seaweed, notably the most abundant kelp found along the west coast of the Uists, Laminaria hyperborea. The stipes (‘stems’) of this important algae are often festooned with dulse, which has a ribbon-like appearance at this time of year, having been ripped and shredded by the force of stormy seas. These kelp plants live for up to 15 years and dulse tends to found associated with older specimens. Dulse also grows on rocks and mussels in the intertidal zone.

The kelp Laminaria hyperborea, tangle, to give it one of its common names,  is an incredibility important species, notably for these islands. The most apparent benefit of beach cast tangle (as well a few other seaweed species) is that it is traditionally collected from beaches after winter storms and utilised by crofters as a natural fertiliser for crops.

However, it is the unseen benefits provided by these kelp forests that extensively fringe the west coast here that make them so important.  Kelp (actually an umbrella name for a number of ‘forest-forming’ macroalgae) has been described as an ‘ecosystem engineer’, a wonderful term that perhaps, rather simplistically, may be described as any organism  that creates or significantly modifies habitats.  North American beavers and termites are often cited as the more obvious examples.

Kelp forests are extremely dynamic and productive with high biodiversity, acting as a habitat and refuge for many organisms and are important for nutrient cycling and energy capture.  Of key importance to this low-lying island chain may be the capacity of kelp forests to offer a degree of protection to coastal zones from flooding and erosion by acting as a buffer, reducing the velocity of approaching waves during storms.  A recent paper that gives an excellent synthesis of the functions of kelp can be found here.

My life is currently awash with kelp – not just in my spare time used foraging for dulse,  at work I am currently managing a research project focusing on kelp.  A world of weed indeed!

As you can see, the dogs thought harvesting dulse this was a great game and quickly cottoned on to what we were trying to do.  They excitedly began seeking out kelp stipes. Unfortunately, when found they then proceeded to chew off and eat the dulse, or run around with the entire stipes hanging out of their mouths, nonchalantly chewing them while running amok.

I was aware that the flavour of dulse is complemented by ale and, in wishing to continue pushing the envelope with my recent bread making exploits (more on these another time), decided to pair the two flavours in a loaf.  I have been making a lot of ale rolls recently and was intrigued to experience how the dulse may alter the flavour and texture of my basic ale roll recipe.

The flavour was malty, full and distinctive. The dulse gave a new dimension and depth of flavour, soft texture, even bake and a pleasant smell that was incomparable with any loaf I have made before.  The colour was interesting, slightly tinged with yellow and the keeping qualities of the loaf appeared to be very good, although I admit, it didn’t perhaps last long enough to really test that out…

As mentioned, there are benefits to drying the dulse before use but without a dehydrator, I decided to try using it fresh. After checking the dulse for inhabiting species and removing them, I rinsed it thoroughly under the cold tap for a few minutes.  I then placed it in a bowl of warm water for half an hour, before drying it with a kitchen towel and then blitzing it quite coarsely in a food processor. I have no idea what the standard practice for fresh dulse is, but presumed this would remove creatures, salt and soften it a bit. It seemed to work.

The recipe provides 2 large loaves and economically uses 1 500 ml bottle of ale. Alternatively, make 1/2 the volume and drink the spare 200ml of ale! Modify according to your preferred method of bread prep. and room temperature.

some semolina for dusting

Although I have always been aware of the existence of salt beef and its origination in Ashkenazi cuisine,  I must admit, I don’t recollect eating it, most probably because it is generally hard to acquire in Scotland and secondly, I have not thought to specifically seek it out. I had a good quality marbled piece of Aberdeen Angus beef and was contemplating what to do with it that would make it special when I came across a number of salt beef recipes online.

Salt beef, it transpires, is remarkably simple to make, so difficult acquisition is irrelevant if you are prepared to make it.  Admittedly, it does require considerable patience during brining.  At this stage, I found myself opening the fridge and staring longingly at the briny brisket, counting the days when it would be ready to cook and consume.

Traditionally, saltpetre would have been added.  This does give the beef its characteristic pink tinge. Although we do have some (for something to do with violin making, not cooking!), I prefer to keep the product more natural, so have omitted it.

Since the beef will languish in the brine for an entire week, it is perhaps not wise to try to undertake this without the benefit of a large fridge. Fortunately, I have one.

This recipe is an amalgamation of several I found online.  I modified the contents of the brine and subsequent cooking ingredients to my own tastes.

a few sprigs of thyme

a sprig of rosemary 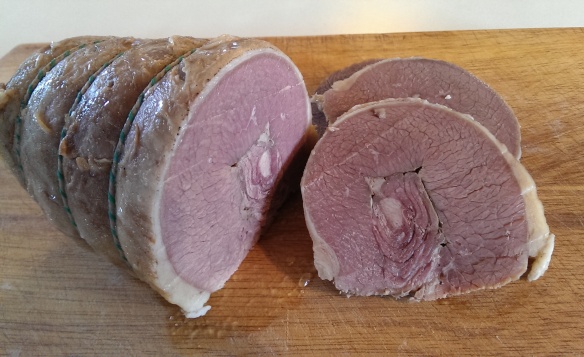 Serve hot or cold.  We preferred it cold, as luxurious lunchtime sandwiches with the dulse and beer bread, some wholegrain mustard and accompanied by small onions I grew last summer, preserved in a sweet and gentle pickle.  There is no doubt about what I will be making with the next brisket I acquire – an outstanding way to celebrate one of the best cheap beef cuts, making it feel very extravagant.

The vile weather continues here, so time for a break. London calling.  Here’s hoping when I return spring will be vaguely apparent (though I did hear an optimistic skylark singing this morning in the short sunshine interlude between the continual low pressure weather systems).

30 thoughts on “Foraging on my doorstep 3: Dulse and beer bread – with my salt beef”